We have announced already Euro T20 Slam Draft will be held in two parts. It was decided after the Media Launch of Official Euro T20 League.
The media launch was held in Dublin, Ireland on 30 April 2019. It was disclosed a few Icon Player and Marquee player. Latest on 19, July 2019 Ceremony held in London and where finalized many starts of cricket.

It’s now confirmed by the responsible officials of Euro T20 Slam that that inaugural draft of the league is scheduled to happen on July 19th, 2019 in London. It’s been confirmed by the organizers that around 700 players from 22 nations have registered for the draft to participate in the 1st ever European T20 league.  The local players from all three nations (Netherlands, Ireland, and Scotland) will be submitted for the drafts by the respective cricket boards.

The 12 players have already been confirmed and selected in Icon and Marquee category where players will earn from $115,000 to $135,000. This is the euro t20 slam salary.

A total of SIX franchises are participating in the league and out of 6 Icon and 6 Marquee players it’s confirmed that each franchise will have 1 Marquee player and 1 Icon. A list of confirmed players is listed below.

The second part of the eT20s draft will be scheduled for overseas (International) star players to make this league competitive and more aggressive, and it is worth noting that six overseas players were announced in the Icon and Marquee Players categories that are discussed in detail here on the initial launch day. A total of 42 players from overseas will participate with the support of three cricket boards in this much anticipated T20 League from Europe.

Confirm, The first part of the Euro T20 Slam draft selected all Netherlands, Ireland, and Scotland, and the local/domestic players. A total of 54 domestic players are selected in this draft where each franchise can select up to 9 players in the team.

The very first season of Euro T20 Slam 2019 is all set to commence from August 30th across the exquisite locations of Ireland, Netherlands, and Scotland. The inaugural edition of the great cricket tournament will feature total six strong teams Edinburgh Rocks, Belfast Titans, Amsterdam Kings, Glasgow Giants, Dublin Chiefs, and Rotterdam Rhinos. Each team will have a total 16 players out of which at least 9 players will be domestic and 7 players could be international.

However, the tournament will feature some iconic players also such as Pakistani superstar Babar Azam, brilliant all-rounder Rashid Khan from Afghanistan, big-hitter Chris Lynn from Australia, destructive wicketkeeper-batsman  Brendon McCullum from New Zealand, star Kiwi player Luke Ronchi, fabulous all-rounder Shane Watson from Australia and star all-rounder Shahid Afridi from Pakistan. Notably, 2019 ICC World Cup-winning team’s captain Eoin Morgan could also be a part of the first Euro T20 Slam as his fans want the home star to play for Ireland and represent the whole native country in the inaugural season. The squads for the grand event are yet to be announced by the cricket authorities.

According to the league rules, each team will have to play at least six local players and a maximum of five overseas players in the playing eleven.

All the six franchise teams – Dublin Chiefs, Belfast Titans, Amsterdam Knights, Rotterdam Rhinos, Edinburgh Rocks and Glasgow Giants,– got to be allowed a chance to choose their icon and marquee players in advance.

Many Well Known Cricketers In The Draft

There has been an extremely high level of interest shown by cricketers playing in all big nations like Australia, Pakistan, Sri Lanka, England and many more. Some of the names we got to know are Ben Cutting, Sarfaraz Ahmed, Mustafizur Rahman, Kusal Perera, Angelo Mathews, Mohammad Amir, Fakhar Zaman, Shaheen Afridi, Colin Ingram, and Tymal Mills. Happy to say Draft Picks For Foreign and Local Players.

https://eurot20-slam.com Visit Site Now European feel proud now they have there as Europe’s own league, the Euro T20 Slam will feature two teams each from the Netherlands Ireland and Scotland. The to...

All six teams owners have picked their desired squad and Euro T20 Slam Teams Squad is officially out now.

Click on each team to check out their team squad. 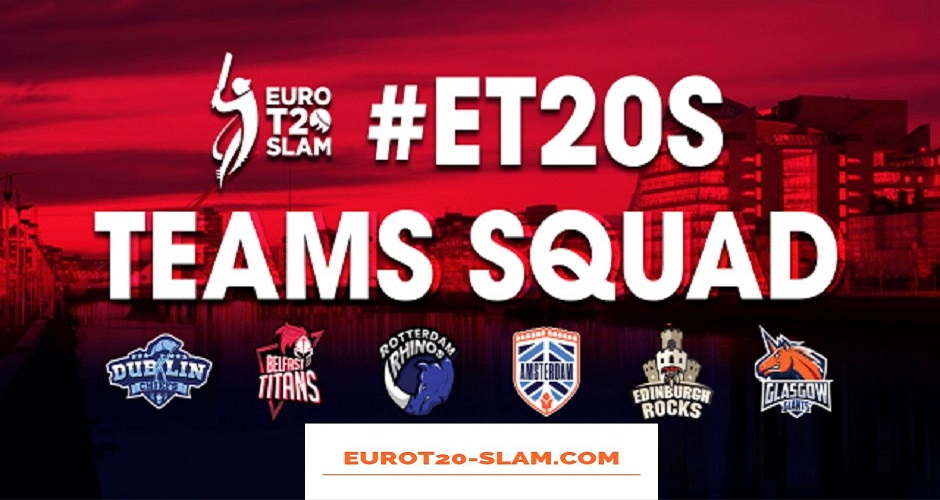